Plenty of attorneys like to boast about their skills and courtroom victories. But does the record actually support such claims? Take a look at some of Mike’s professional milestones and you’ll see a pattern. Time and time again, in difficult cases on behalf of both defendants and plaintiffs, Mike has proven just how adept he is at producing winning results for his clients.

• During one of the most contentious cases ever filed in bankruptcy court, Mike worked for several years as litigation counsel for Georges Marciano, the founder of Guess Jeans. Prior to retaining Mike, Marciano’s legal situation had taken a turn for the worse. Marciano’s allegations of embezzlement against a group of five former employees and his accountant led to massive judgments against him totalling nearly $400 million for defamation and emotional distress.

Mike served as a co-counsel with a prominent Los Angeles law firm after creditors filed an involuntary Chapter 11 bankruptcy petition against Marciano. He helped win major victories in the California Court of Appeal and the Ninth Circuit Court of Appeals that played significant roles in leading to a 2013 settlement for a fraction of the original damages claims against Marciano. 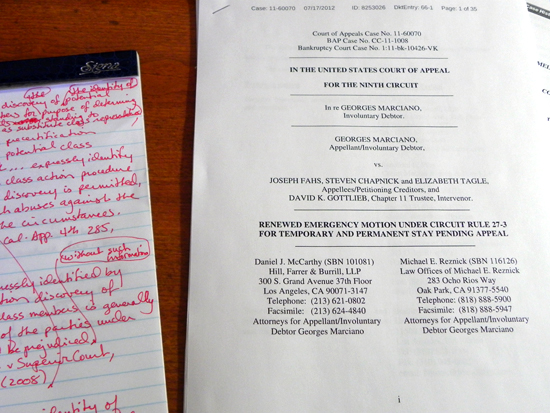 • In the first “bad faith” insurance coverage claim tried in front of a jury following the 1994 Northridge Earthquake in Southern California, Mike and his team won a $7.2 million verdict for his clients against 20th Century Insurance (now part of Farmers Insurance Group).

• Won a $1.875 million jury verdict for fraud and deceit in federal court on behalf of Great Western Bank against Ingersoll-Rand in a case related to loan participation agreements.

• Helped negotiate an eight-figure settlement on behalf of a minority shareholder client in a highly publicized case involving the ownership and control of a company with more than $40 million in annual sales from the manufacture and distribution of a popular vitamin supplement drink.

• During the O.J. Simpson “trial of the century,” obtained an injunction against A.C. Cowllings, barring him from selling the infamous white Ford Bronco used in the chase televised around the world to anyone other than Mike’s client.

• Successfully defended Crafts Cabinets and its board of directors and management in a contentious 2001 lawsuit brought by a minority shareholder.

• Prevailed over prominent attorneys from two venerable Los Angeles law firms while representing a Wilshire Boulevard building owner in a 1999 case against Pacific Bell and its sub-tenant.

• Won a defense verdict on behalf of an Orange County accounting firm against allegations of pervasive fraud.

• Successfully defended a nationally known hotel management company against multimillion claims for fraud and deceit, resulting in dismissals for all clients.